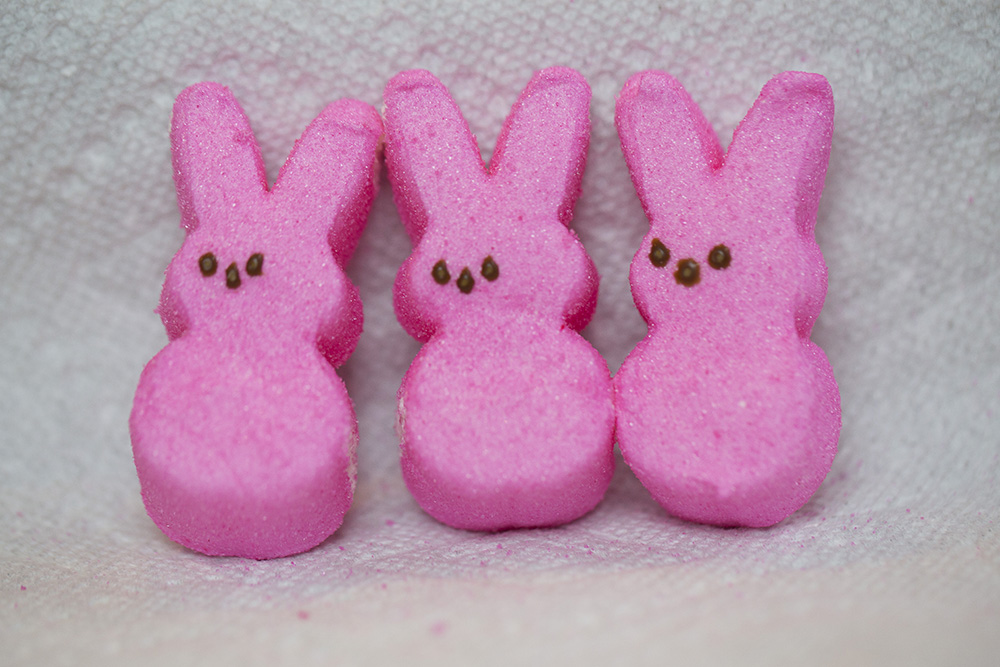 I love Peeps®! But I’m well aware that not everyone shares my obsession. Every year around this time, the funny memes start to show up in my Facebook feed, a million suggestions for what to do with Peeps® besides eat them. Sacrilege! Some even suggest just throwing them in the trash. Again, sacrilege! While others suggest you should let them get stale before you eat them. No way! You eat them while they’re soft and squishy.

No matter how you feel about them, you can’t walk into a grocery or big box store this time of year without seeing rows of them. They seem to multiply like, well… bunnies.

Peeps® stopped being just plain marshmallow covered in colored sugar in 1999 with the introduction of vanilla Peeps® according to The History of Marshmallows by Mary Bellis. This year, six new flavors were introduced including Cotton Candy, Pancakes & Syrup, Root Beer Float, Orange Sherbet dipped in fudge, Chocolate Caramel Swirl and Vanilla Crème.

I managed to find the Cotton Candy and Caramel Swirl at Target®. My son discovered the Vanilla Crème also at Target®. When I visited peepsandcompany.com, I found Pankcakes & Syrup. I loved all the new flavors I tried. My son was especially excited about Root Beer Float, but I have not been able to get my hands on those.

One year, I reluctantly sacrificed a few Peeps® to enter a Peeps® diorama contest. It was a reenactment of The Biggest Loser TV show. I called it “The Peepest Loser.” I didn’t win anything, but I sure had fun making it.

I’m so crazy about Peeps®, I’m on my second bottle of the new Peeps® flavored creamer from International Delight®. In fact, I panicked when I realized that all the Peeps® are about to go away after Easter and bought a 24 ct. box of the pink bunnies. I’ve also indulged in a Peeps® donut from Dunkin’ Donuts®. Sadly, I ate it before I took a picture of it. Too bad, because it was really cute!